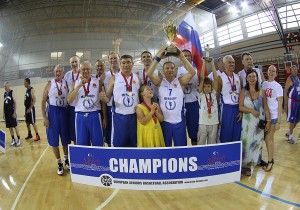 There was hardly any contest in the M60 category final, as Mercury steamrolled Slovenia 78-61 to claim gold. The Russian team from Yekaterinburg dominated all 40 minutes and eased past their Slovenian opponents.

For Slovenia, Nebojsa Macura had a game-high 26 points, to go along seven rebounds. Joze Fiser scored nine points, while Radovan Lorbek chipped in with eight points and 10 rebounds.

The MVP of the M60 category was awarded to Alexander Kharchenkov, who averaged 6 points, 10.5 rebounds for a total ranking of 19.