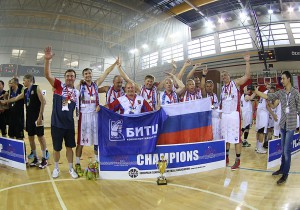 Bitsa-Team from Moscow had no trouble against Dinamo Kursk, winning the Russian duel in the M50+ final 79-54. The Muscovites, who also won the first game in the regular round, cruised home with a win, dominating right from the opening quarter.

Borisov was awarded the MVP prize of the M50 age category.

For Dinamo, Sergei Nokov was the only scorer in double figures with 13 points.

Andriy Berezhynskyy was the top scorer for Krivbass with 20 points and nine rebounds.