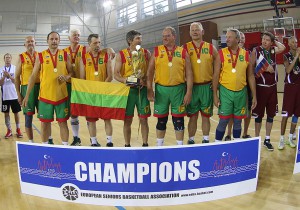 Lithuanian team Salilita did not receive much of a challenge in the M55 age category final, defeating Estonian side TOP Trust 83-47, with Rolandas Penikas, who was named the MVP of the age group, leading the way with 30 points and 13 rebounds.

Andrus Toom was the only scorer in double figures for TOP Trust with 22 points.