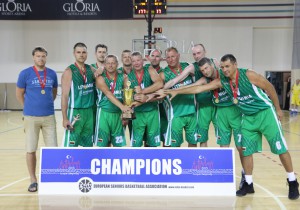 Although Small Planet was the only team in the M40 category and a first place finish was nothing but a sure thing, the Lithuanian side swept through their opponents from M45 category to maintain a clean record at 5-0.

The team from Vilnius registered a 103-83 victory against Musson, the only other previously undefeated team in the M40/45 competition.

Halfway through the second period, Small Planet were leading merely by a point at 35-34, but a 16-5 run to finish the half allowed the Lithuanians to pull away.

The second half was relatively easy for the pre-game favorites, who cruised to a 20-point win with Virginijus Sirvydis leading the way with 32 points and nine rebounds. Erikas Kuciauskas had 21 points and 12 boards, while Egidijus Mikalajunas chipped in with 16 points and seven rebounds.

Valerii Iaichun had a tournament-high 45 points for Musson, but it wasn’t enough to save the side from defeat.

The trophy was presented to the M40 champions Small Planet by Gloria Hotels and Resorts Sales Executive Samet Eyraman.

Virginijus Sirvydis was chosen as the MVP of the M40 category. He averaged 20 points and 6.6 rebounds per game in the championship, with an average efficiency of 23.

Winners of other categories will be determined on Saturday. 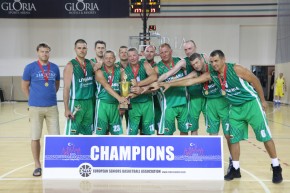