Day 5/6: All champions are clear

ESBA 2018 championship in Pula has reached the end. After 5 1/2 days of games now we have champions in all age categories.

In the youngest ladies age group Nova Arena without any doubt became a champion. Latvians took an easy win 73-47 in the final against Tigris and celebrated gold medals.
Tatiana Iuzhakova with 18 points was the best in the final. Natalia Rumiantseva added 16 points.
Olena Teteruk was the top scorer with 10 points in opposite side.
Nova Arena 30 concentrated in the 3rd place game and made a revenge 49-37 against Kekava. Home team showed a great performance in the second period 17-4 and ran away in double digit advantage.
Maja Ramljak made double double with 21 points and 20 rebounds.
Inta Vinovska scored 10 points.
MVP in W30 – Tatiana Iuzhakova

Final in W45 age group was without any intrigue. Carpathian Bears showed a great performance in the last game and recorded an easily 57-16 win against Dobele which took the second place in tournament.
In the last game all players scored at least 2 points, but the top scorer for the champions was Tetiana Kurillo with 11 points.
In bronze medal game Seduvos Malunos made a revenge 48-24 for the loss in group stage against Legion XXI and dressed with medals. Lithuanians were a better team on the court all game and won each quarter.
Jolanta Ziauniene was unstoppable with 22 points, while Daina Motiejuniene scored 12 points.
Meanwhile, Yevheniia Trehubova scored 10 points.
MVP - Oxsana Kirsanova-Staron

BC Svaja in the age group dominated all tournament and continued its domination in the final as well. Lithuanians 61-37 defeated Pula 50 and took gold medals without a single loss in the championship.
The best player in the final was Ramune Giliene who scored 20 points. Loreta Berukstiene added 12 points.
Helen Smith and Ekaterina Loginova were the best with 10 points each.
MVP in W50 – Loreta Berukstiene
MVP in W55- Olena Savchenko

In the last game Garkalnes novads claimed a victory 75-72 and ended their campaign in the first place, while BC Aqua took the 2nd place.
Normunds Feierbergs scored 27 points.
Iurii Kovalev scored 25 points.
Polyakov-Politechnic played against two teams which have older players in the list of team. The team recorded two wins and was rewarded with gold medals.
MVP in M35 – Tymur Arabadzhy
MVP inM40 – Normunds Feierbergs

Gold medals in the age group M50 went out to Lithuania. Kauno LT United in the final showed a great performance and defeated Patvanka 75-54.
Rimantas Mince scored 20 points. Sigitas Birutis added 18 points.
Saulius Ragauskas, Ramunas Juska and Gintaras Kazakevicius scored 13 points each.
Dinamo claimed a win 72-66 against Mercury-Kazan and took bronze medals. Dinamo took over the control of the game in third period after winning it 21-12.
Vladen Raiskii was the top scorer with 24 points for the winners.
Sergey Shvydkyy was unstoppable in Russian team with 27 points and 18 rebounds.
In the last game in the age group Parnu claimed a victory 62-58, took the 6th place and left Basketclub at the bottom of the table.
Donbass was the only team in the age group and after one victory in the tournament, the team was awarded with gold medals.
MVP in M45 – Kostiantyn Tarasenko
MVP in M50 – Giedrius Peciulionis

Emotional final ended with Veteran Basket victory 67-57 against BGG Perlas. In the middle of the game the difference was only 1 point, but later on Veteran Basket ran away and kept a safe distance from opponents.
Iurii Kosenko was the main factor for success with 32 points.
Mindaugs Lukosius scored 26 points.
Bronze medals went out to Veterani Umag. Even after terrible last quarter 12-23, Veterani Umag was able to keep advantage against Garkalne and took a victory 69-57.
Igor Maras scored 21 points and grabbed 10 rebounds.
Igors Lukis chipped 19 points and grabbed 12 rebounds.
Rovinj took the 5th place after defeating Russian Project 68-63. Meanwhile KFU Gorod Kazan took the 7th place with a victory 67-34 against Sodoma.
MVP in M55 – Iurii Kosenko

Dramatic final happened in the age group. Even overtime was needed in final to find out the best team. After 45 minutes intrigue Vilniaus Statybos Senjorai celebrated a victory 92-91 against AIKEA Portoroz.
Rasid Abeljanov, who scored the last points in the final, was outstanding with 39 points and 19 rebounds in the final.
Meanwhile, Vaso Vujacic was the top scorer with 32 points in AIKEA Portoroz.
Babailar took bronze medals after a win 45-35 against Petergof. Bronze medal winners all game was ahead with several points and were able to keep it until the final whistle.
Boris Nefedov scored 18 points, while Andrei Smirnov chipped 12 points for Petergof.
MVP in M60 – Rasid Abeljanov

LVIV Basket second time in a row 50-38 defeated Czech Republic and claimed gold medals. Volodymyr Gamov was the key factori in the final who scored more than a half points in champions side – 26 points.
Bronze medals in the age group went to Volnic after their win 33-29 against Vilniaus Statybos Senjorai.
Evgeny Abramov scored 10 points, while Vygantas Valiukevicius was the top scorer with 10 points for Lithuanians.
MVP in M65 – Volodymyr Gamov 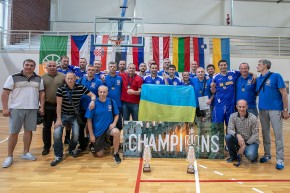