After a day off, teams resumed action in Pula on Thursday. The first finalists of championship became clear after semifinals in some categories already took place.

After the last round in the age group became clear, that BC Svaja and Pula 50 teams will compete in the final. In the last round both teams took victories: Lithuanians 40-26 defeated Czech Ladies, while Pula 50 took a win 54-39 against Legion XXI.

Nadezda Bukharova was the top scorer with 11 points in home team.

Both finalists are known in the age W45 group. Dobele took a win in a semifinal 37-31 against Seduvos Malunos after a tight game. All game the gap between teams was in a single digit.

Iveta Epnere was the key figure in victory with 12 points.

In another semifinal Carpathian Bears controlled the game from the first minute and advances to the final after a victory 47-21 before Legion XXI.

Oxana-Kirsanova-Staron was the only with double digits – 11 points.

Nova Arena continued their campaign without the single lost and advanced to the final. The team took an easily win 81-29 against Pula 30 and will compete in the final with Tigris, who defeated 66-44 Kekava in another semifinal.

Olga Iuzhnaia was the best player with 16 points on the court in Nova Arena team.

Liudmyla Liubarska with 11 points was the top scorer in the winner side in another semifinal.

In the eldest age group Kazan took their first win in the championship 33-25 against Vilniaus Statybos Senjorai. Russians were a better side from the first quarter and kept their lead all the game.

Vladislav Grucha led his team to the victory with 11 points, while Romas Ramanauskas was the best with 10 points in Lithuania team.

In another game Czech Republic reached a important win 65-41 before Vilniaus Statybos Senjorai and advanced to the final. The game was an even in the first half, but later on Czech Republic ran away from the opponents.

Kamil Brabenec was unstoppable and scored 21 points in a crucial game.

Vilniaus Statybos Senjorai defeat 62-37 the main opponent Babailar and advanced to the final. Lithuanians made a double digit advantage in the second quarter and kept their lead till the end of the game.

In another group match AIKEA Portoroz took the first loss 50-62 before Petergor but still will compete in the final on Friday.

BGG Perlas played a very good game in the semifinal round and defeated 68-54 Garkalne, who lost their first game and will compete only for the bronze medals.

Mindaugas Lukosius scored 26 points, while Saulius Krisciunas added 25 points and both players were the main keys in a win.

Both teams who won a group stage were able to advanced to the final. Kauno LT United in a tight game 73-69 won against Dinamo.

Giedrius Peciulionis was the top scorer in the team with 22 points, while Aurius Puricas added 21 points.

In another semifinal Patvanka win only in 3 points advantage 69-66 before Mercury-Kazan, after  Dinamo turnover in the last attack.

Ramunas Juska with 25 points was the main factory in a victory.

Poltava-Kalush showed a great performance in the last quarter and took a victory 70-56 against Parnu even if the result was equal after 3 quarters.

Osvald Korner with 16 points was the top scorer in the team.

Polyakov-Politechnic reached an easy win 88-67 before Garkalnes novads after a remarkable individually Tymur Arabadzhy performance in the first two quarters where he made 6 three point shoots from 7! He scored 30 points in total. 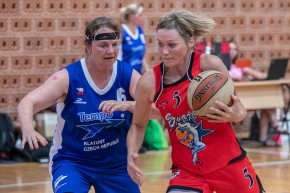